Demi Payne (SFA)
Just two weeks after breaking the collegiate outdoor pole vault record, Demi Payne broke her own collegiate record again with a 4.71m clearance at the Southland Conference Outdoor Championships for her second SLC title. In just two attempts, Payne cleared the height Friday in Hammond, Louisiana and cemented her name in the world ranks as the highest clearance in the world this season.
Pau Tonneson (Arizona)
Pau Tonneson, the junior from Arizona won the Wildcats’ first 2015 conference title after blowing away the competition in the decathlon with a winning score of 7823 points. The point total was a huge personal best improvement for the redshirt junior. What makes Tonneson’s performance even more incredible is that the Wildcat was returning from Tommy John surgery in the spring of 2014.
Clayton Vaughn (Texas-Arlington)
Clayton Vaughn from Texas-Arlington exploded on the scene this weekend with a monster run in the 100m at the Sun Belt Outdoor Track and Field Championships, clocking a 9.93 for the No. 3 fastest mark run in the NCAA this season. Under wind-legal conditions (+1.7), the IAAF recognizes Vaughn’s mark as the second-fastest time run in the world in 2015. 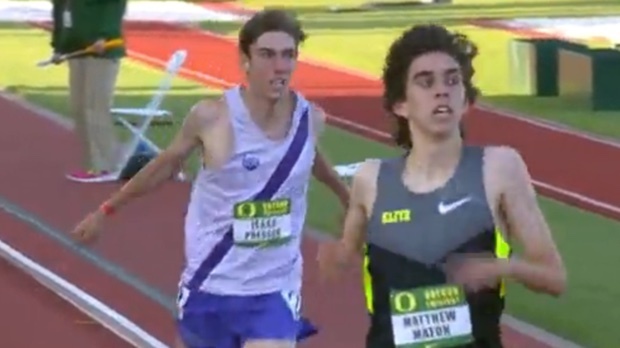 Matthew Maton stole the show Friday night at the Oregon Twilight meet with a stunning performance in the mile that saw the Bend, Oregon prep blaze his way to a 3:59.38. The mark stands as the third-fastest mile time ever run by a high-schooler, behind only Alan Webb (3:53.43) and Jim Ryun (3:55.3). The high school senior will be a special guest tonight on Track After Dark to discuss his breakout performance and taking Alexa Efraimson to prom Saturday night. 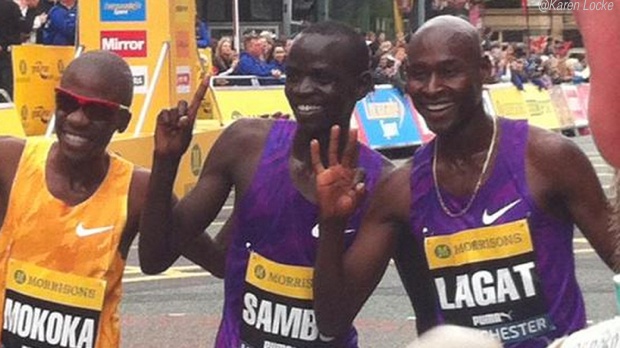 Bernard Lagat has shown time and time again that age is just a number, and this weekend was no different as the 40-year old captured a third-place finish at the Great Manchester Run Sunday morning. His finishing time of 27:48 not only shattered Haile Gebrselassie’s masters world record, but it also tied the U.S. open 10k record set by Mark Nenow in 1985.
Sanya Richards-Ross
Sanya Richards-Ross recovered from her breakout performance at World Relays with a season’s best and world leading mark of 49.95 at the Jamaica International Invitational. Her performance took down some serious contenders, including 2014 national champion and former world leader Francena McCorory.

Shaunae Miller (BAH) pulled a serious upset with a huge personal best of 22.14 and a world lead in the 200m over 2014 world leader Torie Bowie at the Jamaica International Invitational. The performance now stands as a world lead and national record for the 21-year old.

Jaylen Bacon (Arkansas State)
Jaylen Bacon of Arkansas State has a break-through weekend after running 10.10 (1.7) in the 100m and following the performance with a 20.71 (1.6) in the 200m at the SBC Outdoor Championship. His 100m performance was the No. 2 fastest time in Arkansas State history and places the freshman No. 8 in the NCAA this season.
Natalie Schudrowitz (Brown)
Natalie Schudrowitz from Brown clocked a crazy fast steeplechase mark of 10:08.77 for second-place at the Ivy League Championships this weekend. The freshman’s mark places her in the top 10 in Brown school history and in the top 20 fastest marks in the NCAA this season.
Adrian Valles (Cincinatti)
Adrian Valles of Cincinatti emerged this weekend as a national contender in the pole vault after clearing a height of 5.57m, which currently stands as the No. 5 mark in the NCAA this season. The freshman’s performance was a huge personal best, a school record, and earned a decisive title at the Cardinal Twilight.
from: http://www.flotrack.org/coverage/251740-FloAwards-2014-2015/article/31408-FloAwards-Track-Field-Release-15#.VVO0KPmqqkq