Getting in shape without access to a gym or any fancy equipment is totally doable. In fact, bodyweight exercises can not only build muscle and burn fat, they’ve been shown to improve athletic performance and build speed and power, too [1]. Make those moves explosive, and they can help build endurance and really help elevate an athlete’s game [2] [3].

Before getting started, keep in mind that plyometric training should focus on awesome form and all-out effort. That’s why explosive exercises like these are best placed at the start of a workout before muscles are fatigued and performance starts to slow down. Greatist Expert Matt Delaney suggests focusing on just three to four plyometric moves at the beginning of a workout, performing them no more than three times per week. (Giving the body ample time to recover is key.)

When it’s time to bust a move, short sets (just three to five reps) is often all it takes to get a killer workout that may end with jelly legs and an amazing feeling of self-satisfaction. And for those who want to keep the heart rate high between weight training sets, these moves can work well sprinkled in with the rest, says Greatist Expert Joe Venarre. From fiery to flat-out explosive, here are 17 strength- and speed-boosting exercises to get the job done. 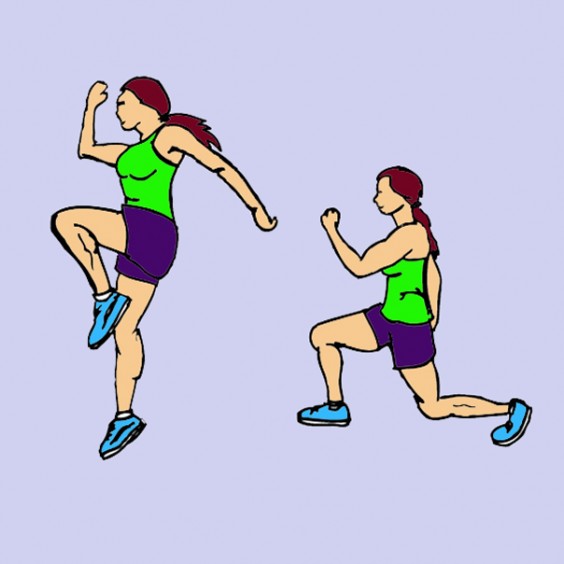 2. Plyo Push-Up: Begin in a standard push-up position with elbows bent at 90 degrees and tucked close to the body. Now push it with enough force to jump the hands off the ground and quickly clap together before landing. This one might be best to practice from the knees and with the goal of working towards doing them from the toes.

3. Box Drill: Fire up the calves by jumping ’round an imaginary box. Begin by balancing on the right foot with a slightly bent knee. Swing both arms forward and hop to the left (don’t miss the landing!). Staying on the same leg, hop forward, then hop to the right, and finally in reverse back to the starting point. Switch legs and reverse the direction.

4. Standing Long Jump: Flashback to elementary school track meets! For this explosive lower body move, stand with feet hip-width apart, and crouch into a squatting position with the arms back. Next, spring forward with both feet remaining together and land on the balls of the feet with the knees bent. Go the hang of things? Spring right back into action for the next jump (with no rest in between).

5. Frog Squat Jump: Begin in a wide stance, feet a bit wider than shoulder-width apart, with toes turned slightly out. Keeping the chest up, drop into a deep squat position, hands reaching to the floor. Now explode upwards into a jump (yes, this is the frog-looking part!). Land softly and quickly repeat with an emphasis on the height of each jump.

6. Lateral Lunge: Slightly easier than doing overhead splits, a lateral lunge is still awesome for improving flexibility. (Being flexible is super-important since muscles generate more power when they contract through a full range of motion. Flexibility = explosiveness!) To complete the move, stand with feet together and then lunge to the right. Make sure the toes of both feet face forward and weight goes back into the heels. Reach the arms forward if you need extra help balancing. 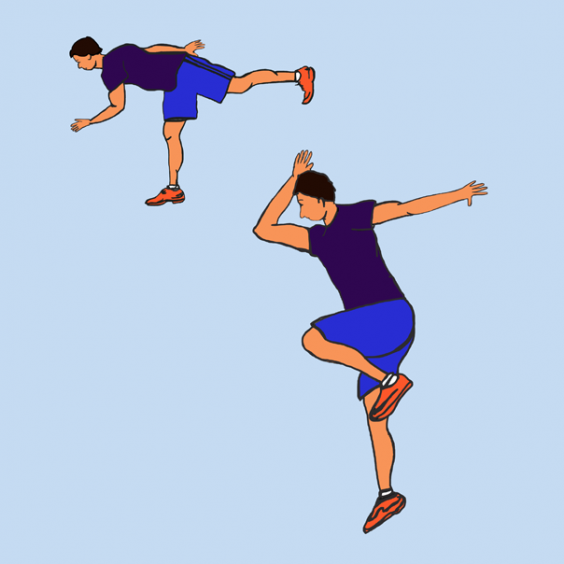 7. Plyometric Deadlift: Stand on the left leg and bend forward at the hips (become a drinking bird) until the right leg and chest are about parallel to the floor (yes, the left hamstrings are supposed to feel the burn!). In one quick movement swing the arms forward, raise the chest, and jump up off the floor. Softly land on the left leg again and slowly lower back into the starting position.

8. Lateral Triple Jump: This move teaches the body to change directions quickly and powerfully. Stand on the right foot, bend the knee slightly and hop sideways as far as possible, landing on the right foot again. Immediately leap forward to land on the left foot. Finish the move by jumping forward one more time to land on both feet. Sound confusing? It’s just a hop, skip, and a jump!

9. Alternating Lunge Jumps: Remember the running man? Begin in a lunge and jump up as high as possible while simultaneously switching the lunge stance in mid-air. Land with the opposite foot forward and then jump again. Think height, not speed. This one is all about generating vertical power.

10. Tuck Jumps: Stand with feet shoulder-width apart, crouch down just a bit, and then spring up into the highest jump possible. Quickly tuck the knees to the chest and then extend them down to land softly on the toes. Immediately jump back up — there’s no time to rest during this one!

11. Side Plank Star: Every major body movement originates from the body’s core. (Not sure? Try running without flexing the glutes, abs, or lower back!) To get explosive to the core, start in a side plank position with the planted elbow directly beneath the shoulder and both legs stacked. Now, keeping the core muscles tight, raise the top leg as high as possible to form a star position. Return the leg back down and repeat on the same side. 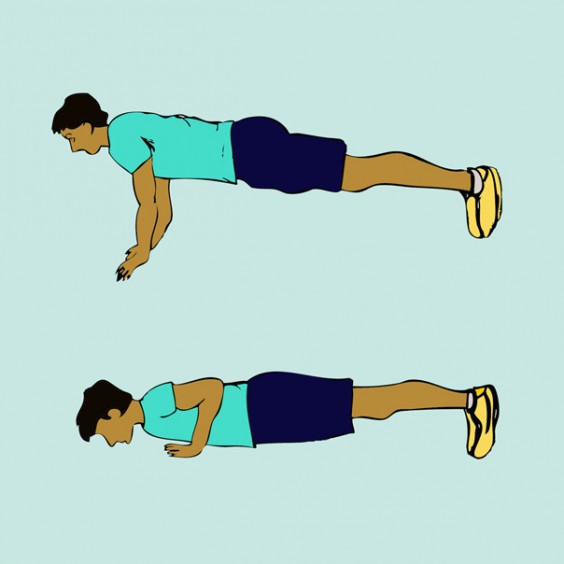 12. Full-Body Plyometric Push-Up: Who said people weren’t meant to fly? Lower into a push-up position with elbows wide and at a 90-degree angle. Explosively push through the hands and keep an extremely tight core so that the entire body momentarily floats off the floor. Keep that core tight upon landing so that the hips don’t drop towards the floor. Move right into the next rep!

13. Kneeling Squat Jump: Ready to kick things up a notch? Begin this (seriously) advanced move kneeling on the ground with the legs spread a littler wider than the hips. Draw the arms back and then forcefully swing them forward to generate enough momentum to jump up into a squatting position. Step back down into a kneeling position and repeat.

14. Horizontal Jump to Tuck Jump: Here’s another power-producing leg exercise that teaches the body to change directions very quickly. Stand with both feet together. Bend the knees slightly and jump as far as possible to one side. Upon landing, immediately perform a tuck jump. That’s one! Repeat in the opposite direction with no pausing between reps.

15. Plyometric Push-Up to Squat: Combine upper and lower body explosiveness into one awesome (and super-advanced!) move. Start in traditional push-up position, and then quickly push through the hands as hard as possible to generate some momentum. As the body rises, tuck the knees to the chest and simultaneously bring the feet to land under the body. The landing position is a deep squat. Hold it for a second and then jump back into a push-up position to repeat.

16. Single-Leg Jump Squat: Balance on one leg, grounding your weight in the heel, and lower into a single-leg squat. Extend the arms forward for balance. Hold momentarily at the bottom of the squat, then throw the arms downwards to generate momentum and jump up off the standing leg. Softly land on the same leg and then head straight into the next rep.

17. Concentric Box Jump: This is one of the best exercises to build powerful legs and an amazing vertical leaping ability. Grab a seat on a step or bench and set another higher step or box (use something solid!) about a foot in front of the first bench. From a seated position, push through the heels, throw the arms forward, and jump up onto the box landing with two feet. Step down, grab a seat, and do it again.

While there is no “one best way” to exercise, explosive bodyweight training can be a great addition for athletes and non-athletes alike. For those trying these moves for the first time, be sure grab an experienced friend or personal trainer before getting explosive. Remember, the goal is always quality over quantity once things start heating up!

Add 6 Inches to your Vertical Jump

The Top 10 Movements to Build Explosive Power for Athletes