Arizona’s pole vaulters sky to the top of the nation

The Desert Vista (Phoenix) vault coach is one of the premier ambassadors for the sport and has a finger on the pulse of the sport. It might be why his quote early in the season has hit its mark perfectly just like one of his vaulters.

“This is going to be a special year in the state,” Guy said during the first week of March. “We are going to have three or four boys and some girls who are going to push to the limits.”

Not long after that, one of his protégés hit the 17-foot mark, as senior Scott Marshall came within 5 feet of the 23-year-old state record. Marshall, a senior at Desert Vista, hasn’t been able to match his effort from the Chandler Rotary on March 23, but he is still in hot pursuit of Nick Hysong’s mark of 17-4 ¾ as the season nears the state meet, to be held May 3-4.

“I was kind of shocked and didn’t know what to do,” he said earlier this season. “That (the height) I was shooting for this season and I already hit it. Now, I can relax and just go compete. I’ll just keep on doing what I am now and I can look at the state record as the goal.”

Marshall has others pushing each time they end up at the same meet.

Brophy College Prep (Phoenix) senior Cole Walsh and Horizon (Scottsdale) senior Grant Sisserson are right there with Marshall as they all rank in the top 15 in the nation, which is led by behind Big Sandy’s Daven Murphy, who cleared 17-8 ½ in Texas.

“You work the technique and get good enough, and it’s fun and you just keep progressing,” Sisserson told the Arizona Republic.

The amount of talent in one year is going to make for a great state meet and has longtime track fans reminiscing about another time in the late 1980s when Hysong was being pushed to become the state’s all-time best.

“They were a great example for me, and I got pulled along by them,” Hysong, who trains several area vaulters at his home, told the Republic. “Through the hunger they pushed into me, I was able to exceed them a little bit. I think we have a crew now that has that same hunger, and they’re going to that next level.”

Guy has seen the same thing and said Marshall needed it to reach the next level.

“There has been a big change in physical maturity and physiological as well,” he said. “His best last year was 15-6 and 15-2 in the one (state meet) that counts. It was good to get 16 (feet) out of the way early and he can really go after it now.”

The success isn’t limited to the boys, as two girls are in the nation’s top 25 and three more are in the top 55.

Jenny Rolph of Liberty (Peoria) is 46th at 12-1 and Desert Vista freshman Aliya Simpson, who owns the state freshman record at 12-1, have also cleared impressive heights. The same can be said for Cami Bartlett of Basha (Chandler), who is 54th at 12-0.

Westlake track star is one of best pole vaulters in state, country 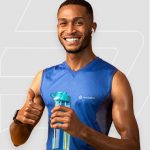