Brad Walker, Men’s Senior Pole Vault, Champion.
On his vaults: “It’s a little lower than I would have liked. It was a little bit harder today to jump than I thought it was going to be. It was a good wind, but it was hard to gauge like a repeatable easy run. I was under I was out trying to gauge that. I made 5.65 meters, first attempt, when nobody made the next bars, they just went up to 5.8 meters to try and get a good bar. I made a team, relief that I did, but not so pumped about it. I would have liked to have gotten the next bar (5.8 meters) and taken shots at 6.0 meters and so.”

Jeremy Scott, Men’s Senior Pole Vault, second place.
On his vaults: “Great conditions, it really was, it certainly helped me out where it this is only my second meet and it kind of helped me run, it was hot, by the end I was really, really tired and that was probably by limiting factor. When you get a nice tail wind like that on a nice track, you just worry about running, that’s easy, and then the technique part comes into it. It was a season best; I thought I was going to jump 18-8, which would have been the next bar. It was pretty much right on schedule, I had three really good jumps on it, just kind of got rob; I am really happy with the results.”

Jack Whitt, Men’s Senior Pole Vault, third place
On his vaults: “I didn’t really expect to get third; I wanted to, there were a couple of other really good jumpers. I guess I had a little bit better day. Struggled on a couple of bars, third attempts, came back and made 16 on my first attempt. Getting third is a lot higher then I really expected, it’s just a bonus. It was pretty consistent on our backs, it wasn’t too bad, I have jumped in a lot worse. I just couldn’t really get in a rhythm. I think I expended a little more energy at NCAA’s two weeks ago than I thought I would have.” 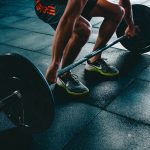