Barber Repeats As MAC Field Athlete Of The Week

Barber, who is the No. 2-ranked pole vaulter in the country, continued to establish himself among the nation’s elite athletes with a jump of 18-02.50 at the Kent Dual last Friday night.

The winning mark was nearly two feet better than any other competitor on the day as he improved on his season-opening vault of 18-01.75. After passing on the first four heights, Barber cleared the next five – starting at 16-03.25 and progressing to 18-02.50 – on his first attempt.

Barber was a two-time All-America First Team honoree as a true freshman a year ago and finished third overall at the NCAA Outdoor Championships. He became the Canadian Pole Vault Champion this past summer and is the owner of both Zips’ school records for the indoor (18-04.50) and outdoor (18-08.75) seasons.

The Akron men, who are ranked No. 5 nationally in the dual meet rankings compiled by Track & Field News with a 2-0 record, will join the Zips women at the Penn State National in University Park, Pa., from Jan. 31-Feb. 1.

The Akron women enter the week ranked No. 14 in the same rankings after spliting their dual meet schedule with a win against Cincinnati and loss to the Golden Flashes. 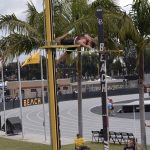