The Ukrainian-born Bubka, who won six straight pole vault titles in the International Association of Athletics Federation (IAAF) World Championships from 1983-1997, said the only way for the Philippines to produce world-class athletes is to improve its grassroots program and encourage more youngsters to join the sport he describes as the “most popular in the world.”

Aside from meeting with Juico, the 50-year-old Bubka, who is also the IAAF vice president, had a short chat with aspiring pole vaulter Ernest Obigna, who was joined by his parents and coaches.

During the short meeting with 18-year-old Obigna, Bubka said he is willing to assist him or any Filipino trackster who would like to train overseas, particularly at the IAAF Training Center in Italy.

“These are excellent facilities and there are good coaches who are working there and maybe you can come together,” Bubka told Obigna and his family.

Bubka won his first gold in the IAAF World Championships in 1983 when he represented the then-Soviet Union in Helsinki, Finland. He won the title with a winning height of 5.70 meters.

He won the next five editions of the World Championships, posting his best mark of 6.01 meters in the 1997 games in Athens.

Bubka also won his lone Olympic gold medal in the 1988 Games in Seoul with a distance of 5.90 meters. He retired in 2001 before becoming a sports official in Ukraine and the IAAF.

Juico said the meeting with Bubka will give PATAFA new ideas to strengthen its programs following a six-gold performance in the 2013 Southeast Asian Games in Nay Pyi Taw, Myanmar. 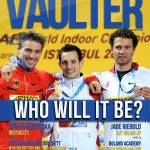