Track and Field magazine named Daven Murphree to its Prep All-American list, and listed the Harmony graduate as the top prep school vaulter for 2013. Murphree vaulted higher and topped the charts more often than any other high school pole vaulter this year.

Track and Field is the prime source for those interest in both indoor and outdoor track and field events and personnel.

Murphree was the over-whelming choice for the top pole vaulter. Selection to the list is determined by who had the highest vault and who won the major meets.

He also came in 7th in the balloting for the Boy Athlete of the Year honors, behind Randy Winkler, a hammer-thrower from Averill Park, N.Y. who had 192 points. Murphree was 7th with 102.

“Very good in the major meets, Murphree was an easy choice for the top spot…The USATF Juniors was important in sorting things out as the top vaulters met each other on many occasions,” Track and Field said of their selection procedures and how Murphree won.

The Harmony athlete, who is now at Stephen F. Austin State University on scholarship, won first at all six of the meets the magazine listed in their selection criteria. He was first at New Balance Indoor Nationals, Texas Relays, State (UIL meet in Austin), Great Southwest, New Balance Nationals, and USATF Junior Champion. None of the other members of the top five prep stars had more than three first place finishes.

This is the 40th year on the boys’ side for Track and Field to list Prep All-American selections. 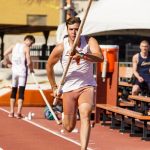