Beyond that it’s all a bit of a mystery.

But the 2006 Commonwealth Games silver medallist is gradually learning more about the game as his son, Oleg, emerges on the AFL radar.

Oleg, 18, has shunned athletics — the sport in which his dad won the world title in Canada in 2001 — to become a utility for North Adelaide.

He is among 15 Croweaters who have been invited to the AFL draft combine in Melbourne to be scrutinised and tested by club recruiters next month.

“We didn’t plan for Oleg to become an athlete — we didn’t push him into any sport.

“(Footy) is good fun, a good game, lots of action.

“Being in a big sport is something different and not everyone can make it.

“But I’m already proud of him.” 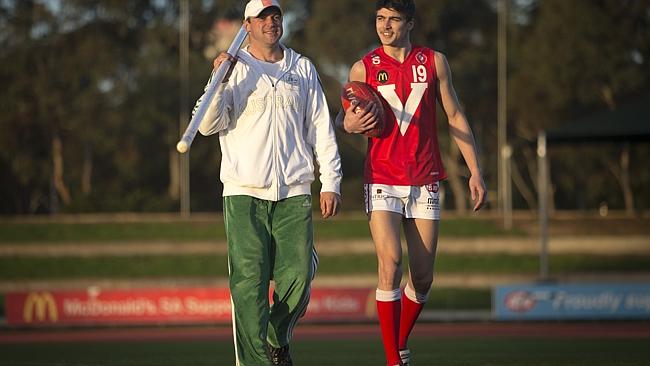 Former pole vault champion Dmitri Markov with his son Oleg, an up and coming young footballer.

Oleg was born in Vitebsk, Belarus, but was only there a few months before his family followed Dmitri’s pole vaulting coach to Adelaide in 1996.

Within five years, Dmitri was competing for Australia, had finished fifth at the Sydney Olympics and defied a chronic foot injury to win the 2001 world championship in Canada.

Despite his background, Oleg fell in love with footy, not athletics, in primary school.

“I was playing marks up at school and noticed I could jump a bit higher than most others,” Oleg recalls.

From there he joined Gepps Cross and then the Roosters’ under-13s.

“I couldn’t get enough of it and got more and more into it,” he says.

Oleg’s experiences in track and field have been limited to a handful of high jump competitions two years ago “to get my mind off footy over summer”.

His best result was fifth at the all-schools national championships in Hobart but he has not pursued the sport further.

This season he has played just three under-18 games for North after injuring his collarbone in round one.

The injury led to him being cut from SA’s 40-man under-18 squad for the midyear national championships.

Oleg says he was shocked after receiving his draft combine invitation given his injury struggles this season.

“It’s definitely my dream to play AFL and if it happens I’ll make the most of it.”

Off the field, Dmitri is making up for his lack of footy knowledge by passing on sprinting and recovery techniques to give his son a competitive edge.

“His strength is his athleticism,” Sanders says.

“He breaks three seconds for the 20m sprint, his beep tests are up their with the best (for his age) and he’s obviously got a great vertical jump.”