Maggie Vaults Over the Moon is a source of inspiration for Kristen Harris, a small-town Kansan who soared to record heights this past season as a pole-vaulter at Tabor College.

“Reading Maggie before the track season gave me the inspiration and drive to compete for God’s glory,” Kristen said. “The book really captures the emotion and thrill of pole-vaulting and I was blessed to feel the way Maggie felt in real life.”

Kristen’s “Maggie Moment” happened at the recent KCAC Outdoor Track and Field Championships. With the crowd cheering, she stood on the runway, preparing to attempt a new school and KCAC record of 11 feet.

“I had to take a deep breath to calm myself from the excitement and I was thanking God for the ability to pole vault,” she recalled. “I even heard the track announcer over the loudspeaker, saying that if I cleared this height it would be a meet record.

“Counting down my steps on the runway, planting the pole, and clearing the height, I felt just like Maggie. Like I’d soared over the moon!”

Kristen had been a successful runner and hurdler at Chapman (Kan.) High School, a small Kansas town (Pop. 1,400) much like the fictional Grain Valley, where the story is set. She signed a track scholarship to compete for Cloud Community College in Concordia, Kan., where her father, John, holds the indoor pole vault record at 15-6.

Knowing her pedigree, Cloud Coach Ted Schmitz sent Kristen to the Tailwind Pole Vault Club, located in Jamestown, about 10 miles west of Concordia. Tailwind is owned by Dr. Mark Breault (Doc Bro). Maggie Vaults Over the Moon is dedicated to the vaulters at Tailwind.

Entering the Tailwind facility was a life-changing moment for Kristen, whose eyes were opened to the world of pole-vaulting. She quickly rose to new heights, improving to 10-6 in two seasons, and placing 10th at the NJCAA Track and Field Indoor Championships.

Like Maggie, Kristen is a very determined and hard-working pole-vaulter. Her lifetime personal best vault of 11-3 came after vaulting late into the night at Tailwind. “Mark let me jump until I finally made the height, after 11 o’clock,” she recalled. “He has a deep passion for the pole vault.”

Inspired by her success this past season, Kristen is making plans to soar even higher in her final year of competition. Her goals are to win the KCAC and to qualify for the KCAC National Championships. She also plans to complete her lofty quest in the classroom; to graduate with honors and gain admission to Optometry school.

“Maggie faced many hardships, and mine don’t compare to hers,” Kristen says. Even so, Maggie author Grant Overtake is rightly impressed that she is able to pursue a chemistry major while being a full-time college athlete, a lifestyle which demands her highest and best all of the time.

“I’m delighted that someone with Kristen’s talent, drive and character was inspired by a story about a fictional character who is, in so many ways, just like her,” Overstake adds. “Just like Maggie, I expect to see her soon, over the moon.”

Maggie Vaults Over the Moon is an inspiring read for fourth graders to adults. From now through August, the author will make a donation to the Kansas High School Activities Association (KSHSAA) Sports Hall of Fame for each copy sold at the Watermark store, located at Douglas and Oliver in Wichita, or via the Watermark website. 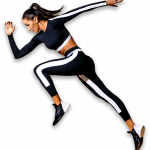