Not only did you get a coveted parking space, you were front and center when Kyle Pater set a section meet record by soaring 16 feet, 4 inches in the pole vault before taking three unsuccessful cracks at what would have been an all-time section-best 16-9.

Not bad for someone who finished in the worst possible position a year ago — fourth place. The top three qualify for state.

“That motivated me all season,” said Pater, a Mt. Carmel senior. “You don’t want fourth place. I couldn’t bear to go and watch.”

No such problem this year as Pater is the state leader at 16-6, having cleared 16 feet five times in progressively more important meets. He will be the favorite in the state championships Friday and Saturday in Clovis.

He didn’t exactly have three close tries at 16-9, hitting the bar with his feet on the way up. But with each attempt at a personal record he learns something that will help him the next time.

Pole vaulters often change implements during the competition and this time he felt he maxed out at 16-4 and switched to a heavier pole. He’s still working to master its intricacies.

“I need to stay with the pole a little longer,” said Pater. “I’ll fix the kinks.”

Pater dueled Otay Ranch’s Xander Law vault for vault until 16-4 and then moved into the winner’s circle with a third-jump clearance, eclipsing the meet record of 15-9. 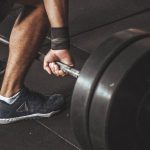