Watch out Jessica Ennis! Meet the amazing pole vaulting pensioner – who is a world champion vaulter, heptathlete and sprinter at the age of 77.

Former bank clerk Dorothy McLennan, has scooped dozens of gold medals and world records since taking up athletics professionally in her 50s.

And at an age where many of her peers prefer sitting down with a cup of tea in front of the telly, spritely Dorothy trains three days a week in preparation for her next world championships.

SCROLL DOWN FOR VIDEO 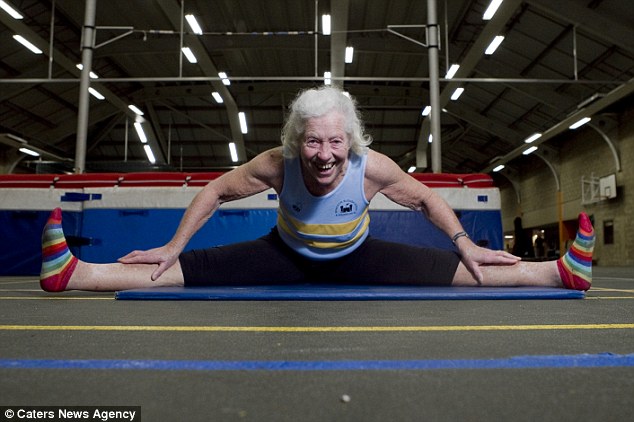 Doing the splits: Dorothy has not let age stop her from taking part in athletics and loves doing yoga to keep her body supple 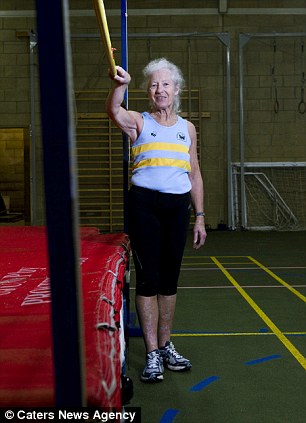 Spritely: Dorothy McLennan trains three days a week in preparation for her next world championships Defying her age: Dorothy McLennan pole vaults at the club where she is coached by her son Stephen

Dorothy, from Windsor, Berkshire, first became a champion pole vaulter in 1991, but she won gold again in 2012 and is the current world champion in the 75 to 80 age group category.

The pensioner has competed at every World Masters and European Masters event since 1991, which are both held annually, taking a medal at every single games.

She says she has at least 42 medals and estimates at least 35 of them are gold.

The sprightly OAP most recently won gold for heptathlon at the European Masters Championships in Poland in 2006, when she was 70.

Despite being in her late 70s, Dorothy has now taken up Usain Bolt’s event – the 100m outdoor sprint – and is hoping to smash the record at the British Masters Championships at the end of February by the running the race in 16 seconds.

Dorothy, who lives with her husband Ray and can pole vault 2.1m, said: ‘People are always very surprised when I tell them I do pole vaulting and sprinting, but I don’t see what is so unusual about it. 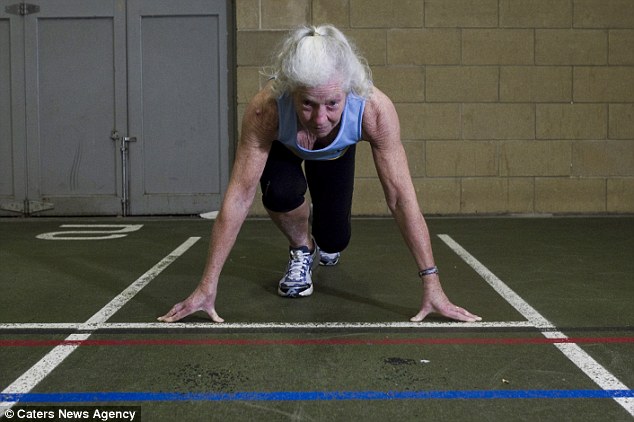 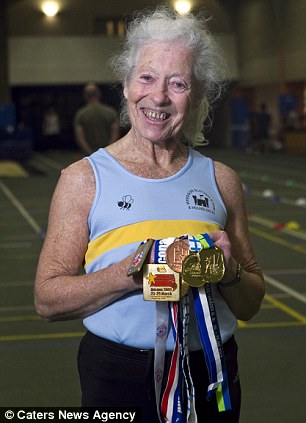 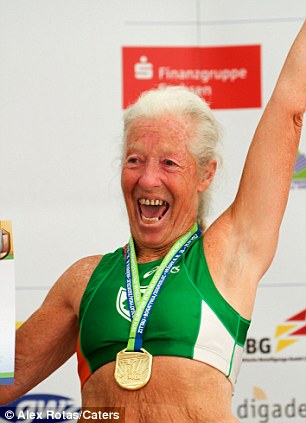 In great shape: The 77-year-old was inspired to take up athletics after watching a man in his 80s finish a marathon 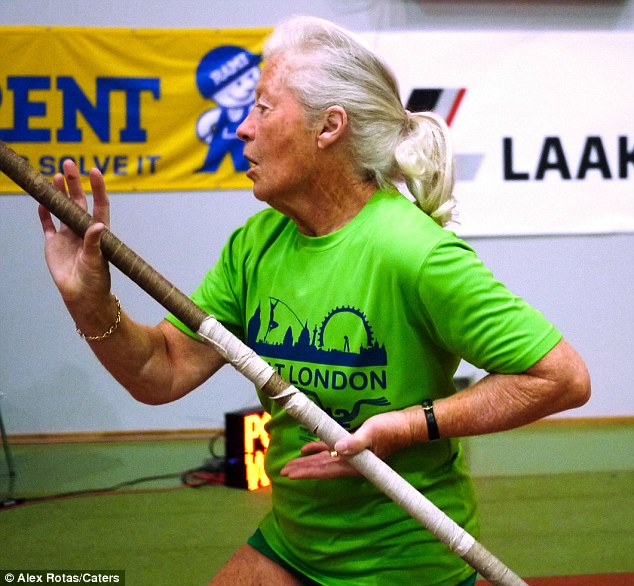 Strength: Dorothy McLennan has reached heights of more than 2.1metres in the pole vault despite being in her 70s

‘I love getting out and about and it keeps me fit and healthy.

‘I don’t just do it to keep active – I’m a competitive person, and if I’m going to give something a go, I want to do it to the best of my ability.

‘I’ve had a go at the heptathalon, and won gold in my age category twice at the world games – but the hurdles were quite unkind to my hips.

‘I took up pole vaulting in 1991 and have been doing it ever since.’

Dorothy was inspired to take up professional athletics in the mid 1980s after watching a man in his 80s finish a marathon.

Now she spends up to nine hours a week training at Thames Valley Athletics Centre. 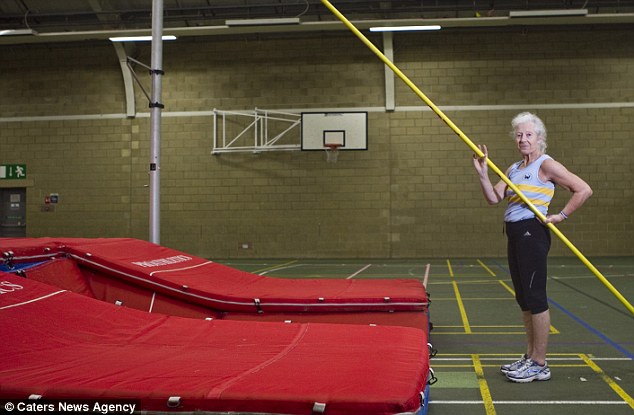 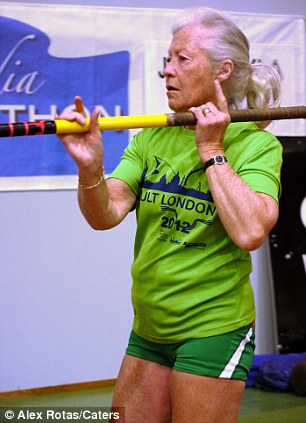 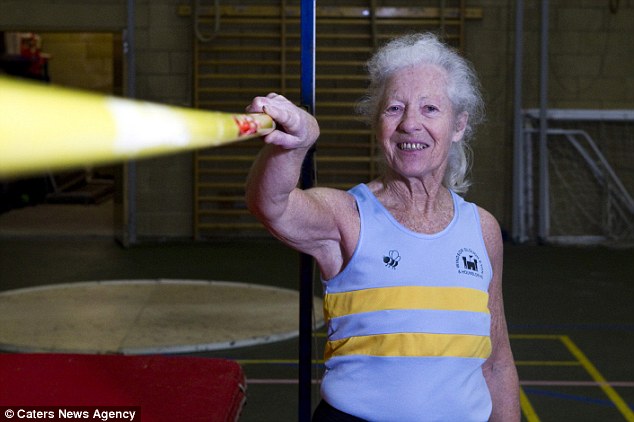 Despite being in her late 70s, Dorothy has now taken up the 100m outdoor sprint

She said: ‘I’m not a natural sportswoman, and I’ve had to work very hard to achieve my success.

‘Pole vaulting is not the easiest sport to try, but I’ve loved the challenge of it.’

Her athletic talents have seen her travel all over the world to compete – from Australia and Japan to America – and most of the countries in Europe.

‘It’s a great thrill travelling around the world and entering all these competitions, it keeps me feeling alive – and it certainly beats sitting around the house doing nothing.

‘I had never been very interested in running in my younger days, and I always thought I was too old to take it up.

‘But when I saw this older gentleman finish the race – and not at the back, either, I thought, if he can do it, why can’t I?’ Support: Incredible Dorothy McLennan is coached by her son Stephen. The former bank clerk took up athletics in her 50s Winning: Dorothy is in incredible shape for her age after competing in world athletics competitions aged 77

After Dorothy bought a pair of running shoes, she began jogging around the block.

But as she got better she decided to join an athletics club where someone suggested she try out pole vaulting.

I’ve given everything a go – I’ve had the most wonderful time. I’ve visited countries and cities I would never had the chance to otherwise when I’ve competed there.

‘We don’t get any funding, which is a shame, because older people have a lot to offer.

‘I’ve been pole vaulting for more than 20 years, and it is starting to get a bit hard on my joints, so I’m going to focus on my sprinting instead.

‘I had to do a lot of sprint training for pole vault, so it seemed like the natural thing for me to do next.

‘I train with a lovely group of people, under my son, Stephen. I don’t get any special treatment, though, when we’re at training, I’m just Dorothy the pole vaulter.

‘It’s the only time I let him tell me what to do.

‘My family and friends are all very proud of me, they’re used to me nipping off to training and spending my weekends competing.

‘Some people might think it’s an odd thing for someone in their 70s to be doing, but I’ll stick with athletics as long as I can keep going.

‘I’ve been doing yoga for almost 20 years too, which helps keep me fit and supple.

‘Nobody is too old to exercise and keep healthy – I’d recommend athletics to anyone.’