Athletes have been warned not to make any political gestures or demonstrate at the 2014 Winter Olympics in Sochi.

Russia has been criticised for its human rights record and for passing a law banning gay “propaganda”.

But International Olympic Committee (IOC) boss Thomas Bach says athletes should avoid making any kind of statement during the Games.

“As an athlete, you do not want to be confronted with any kind of political controversies at the Games.”

A former Olympian himself, Bach says he is trying to protect competitors from getting caught up in controversy.

“I know from my own experience, this is key,” said Bach, who won a team fencing gold medal for West Germany in 1976. 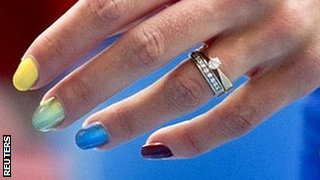 Swedish athletes Emma Green-Tregaro and Moa Hjelmer painted their fingernails in the rainbow colours – a universal symbol of gay pride – during the recent World Athletics Championships in Moscow.

The IOC plans to draw up a letter to send to athletes when it meets in Lausanne on Tuesday, and has already asked Russia to clarify how the law might affect the Games.

According to the Olympic Charter, the IOC can expel athletes who violate Rule 50, although it has said the rule would be “interpreted and applied sensibly and proportionately”.

That move provoked widespread criticism of its government and president Vladimir Putin.

It also raised questions about the treatment of athletes who wear a pin or patch or carry a rainbow flag – a sign promoting diversity and inclusiveness – to support gay rights.

There was controversy at the World Athletics Championships in Moscow earlier this year when Swedish high jumper Emma Green-Tregaro made a stand against Russia’s anti-gay laws by painting her nails in rainbow colours.

“I wouldn’t say it was a protest, more of a statement of what I think,” said Green-Tregaro. “It felt right.”

Following the controversy, officials advised Green-Tregaro to repaint her nails as the demonstration was a breach of regulations, while Russia’s pole vault star Yelena Isinbayeva criticised the athletes who painted their nails.

Tigers duo is vaulting to success