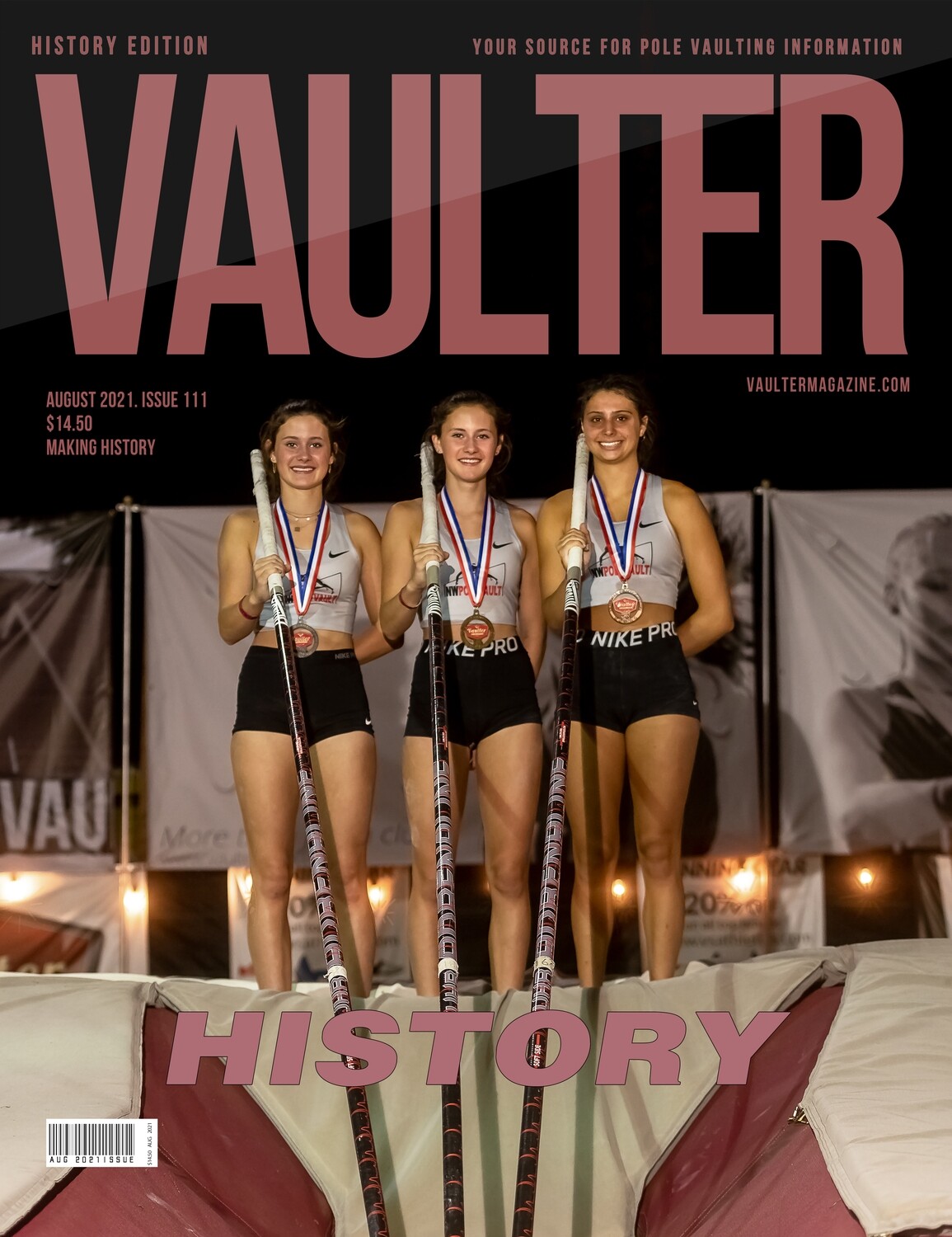 Whoa, July is now gone! The Olympics are underway and one professional pole vaulter that will not be attending is Sam Kendricks. Sam tested positive for Covid after multiple times and once he did they quarantined him and did not test him again for validity. One test negative and he was gone! No longer able to jump for the great Nation that we so love. Who’s taking his place, Matt Ludwig, is an awesome young man and a great fit for the team. On to August we go.

On the cover, we had Tim Reilly with North West Pole vault Club for our coaching series and his athletes bumped him off the top spot by making history. Three high school girls jumped 14’ in one meet at the Vaulter Magazine national Championships. This is the first time in history that this has happened in one meet. Amanda Moll, Hana Moll, and Ally Neiders all from his club making this possible for the pole vault community to witness. “In 1987, I had the fortune to find Baylor Legend Carl Erickson guest coaching in Seattle for a week, and my brain blew up.”

Kreager Taber is back with more news about the Olympics. Olympic Teams Named and Final Preparations Made for Tokyo is her newest article. “He described that Nilsen’s mentality is one of his best attributes as an athlete, saying “his mentality during competing has always been one of his biggest attributes, his ability to kind of fire up, bring the intensity every single time in a meet situation, never any doubt.” So much cool information about the athletes, this is an awesome read.

“Push hard out the back!” That is what I heard a coach tell their athlete as the athlete stepped on the runway at the Georgia High School State Meet. That was far from the first time I’ve heard that phrase.” Matt is back and it’s all about the run this week and we are loving the new addition that we have about the technical side of pole vault from Matt. We are blessed to have so many amazing writers coming through for the magazine.

For the last year, we have given insight into the status of the pole vault community and the sport as a whole. USATF Nationals stops all covid testing at Nationals because all of the tests were coming back positive, asking participants to buy their own and submit, according to many parents on hand. A survival rate of well over 99% and we are having measures such as this happening still. Will it change, who knows, but it seems to be the new normal they were all hoping for. Next month we will spotlight another amazing coach.