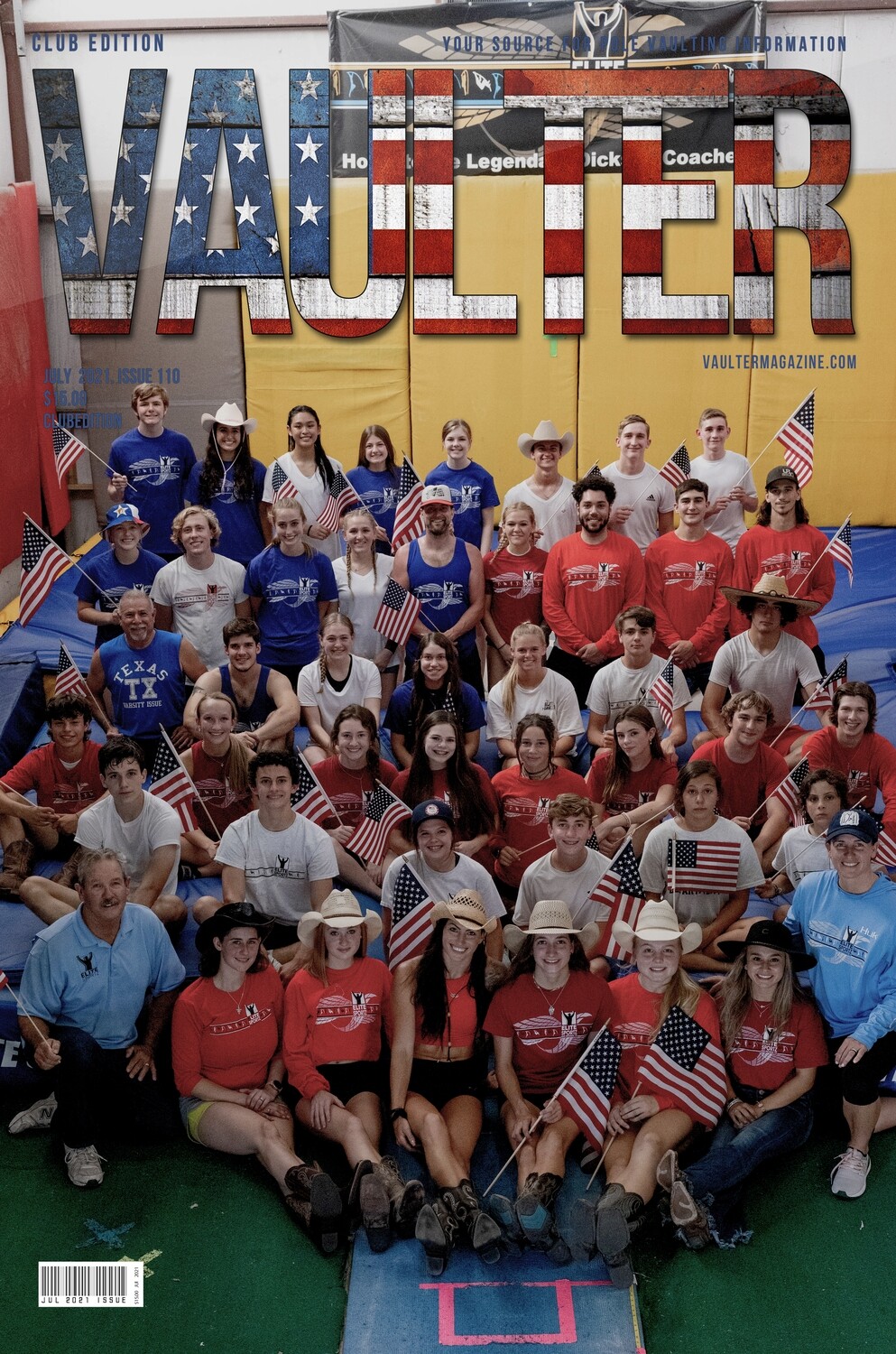 June flew by and now July is hear and the Olympic Trials are over. For the men, the top three are Chris Nilsen, Sam Kendricks, and Kc Lightfoot and for the ladies side, we have Katie Nageotte, Morgan Leleux, and Sandi Morris. We have a few new names heading to Tokyo for the Olympics. Congratulations to you all. July is going to be full of pole vault meets now that the states are quite open again. We will have the Tokyo Olympics, so the month will be quite packed. Vaulter Magazine National Championships is filling up quite well and will be one heck of competition for the high school and middle school athletes.

Elite Sportz out of Texas is on our cover for July 2021 and they are jumping in style. This club and team have always represented the sport very well with some of the best camps in the nation. “The day-to-day operations of Elite Sportz include private training, group training, clinics, and summer camps. Athletes will travel from all over the state of Texas to come train with the club, recognizing the quality of training they receive at Elite Sportz and making extreme efforts to be a part of it.”

North County Pole Vault Club was born out of adversity. With that said here is a story about a club out of California that has put its name in the books. “Our vaulters were starting to get attention from colleges, and other athletes began coming on board to train. That momentum and exposure have propelled us to where we are now. We attract athletes from several counties to come train in San Diego and have grown into the largest vault club in CA.”

Matt Barry is back at it with a second article about the bottom arm and how they accomplish this task. “Standing next to a handful of PVATL athletes and another coach, I said to myself, just loud enough for the others around me to hear it, that “the athlete couldn’t jump past their bottom arm”. Take the time to read this and Dave Butler's book that he has put together about the pole vault. Good job everyone!

The life of the pole vault with a zoom meeting. That seems to be the nature of the sport right now if you are following along with the Olympics and USATF. We wanted to go to the trials this year and had it all locked on, but you could not unless you showed proof of vaccination. So, as we looked into the crowd of empty seats, it is quite clear that people did not want to be part of that situation and stayed home. Once they all go broke and realize they cannot fill the stands, they will change their mandate or go broke. Next month we will start our coaching series and we have a treat for you and readers. Stay tuned.