In a brief media availabality before the Saturday session of the Prefontaine Classic, TrackTown USA president Vin Lananna gave us a few details about the Hayward Field renovation.

Lananna said the renovation would begin this fall with the east side of the stadium.

He said reconstruction of the east side would be complete by the end of April, when work crews will pause and Hayward Field will play host to the 2017 Pac-12 Track & Field Championships, the Oregon state high school championships, the Prefontaine Classic and the NCAA Championships.

Left hanging was whether the Oregon Ducks will hold the Oregon Twilight next spring. The meet has been the program’s last in the regular season in recent years, and a chance to honor the UO seniors.

The Twilight usually takes place the first week of May. So, under Lananna’s timeline, the standium would be available should the UO program choose to take advantage of it.

Lananna said Hayward won’t look hugely different in May of 2017, although the east grandstand will be updated, the weights and measures building will be gone, and there will be new and improved spectator amenities, such as more and better bathrooms on the east side.

Work on the west side won’t begin until after the 2017 NCAA Championships.

— Lananna and TrackTown USA CEO Michael Reilly addressed the TrackTown Summer Series, which will consist of one meet in 2016 at Hayward Field on July 29.

But they offered few details that have’t already been made available. They wouldn’t say who the investors are who are putting up money for this thing. Nor is it clear where the championship meet will be held in 2017, when the the west grandstand at Hayward Field is scheduled to be razed.

Lananna suggested the championship meet might move to Portland. But he wouldn’t address a possible venue.

— Check out the gallery of photos from The O’s Erik C. Anderson at the top of this post for shots of Renaud Lavillenie competing in the Prefontaine Classic pole vault in Oregon Duck gear.

The crowd seemed to love it. And maybe it helped the world record-holder win the event. Who knows?

Lavillenie talks about it in this video from The Oregonian.

Here is my story on the men’s competition at the Pre Classic, which leads with Pre Classic favorites Justin Gatlin and Asbel Kiprop: 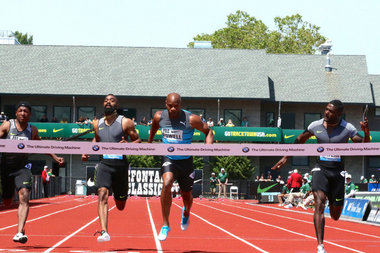 Justin Gatlin and Asbel Kiprop ride the love to victory

Renaud Lavillenie wins the pole vault while decked out in Oregon Duck gear.

And here is Andrew Greif’s story on the women’s competition, which leads with a pair of U.S. records: 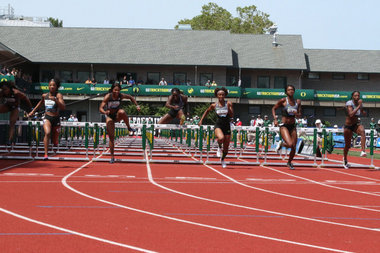 Harrison ran the fastest 100-meter hurdles in 28 years with her victory at Saturday’s Prefontaine Classic.

— I missed this while going through results yesterday from the NCAA West Regional, but Oregon sprint star Hannah Cunliffe failed to qualify for the NCAA Championships in the 200 meters on Saturday.

The official UO release does not mention Cunliffe’s failed qualifying attempt. She ran, but placed 16th. There was immediate speculation about whether she was running hurt.

It was a less than stellar regional meet for the UO women. Star sprinter/jumper Jasmine Todd either quit the team or was booted during the regional.

The most recent Track & Field News form chart for the NCAA Championships — June 8-11 at Hayward Field — projects the Ducks to win the women’s title with 57 points and Arkansas to finish second with 50.

But the form chart has Cunliffe placing second in the 200 for eight team points and the Ducks winning the 4×100 relay for 10. Todd had run the leadoff leg for Oregon’s 4×1. Cunliffe has the third leg.