GULF SHORES, Alabama — With the completion of the $550,000 track project at the sportsplex, the city is ready to host the state high school championships in early May and is beginning to court future college and amateur track-and-field events.

Grant Brown, director of recreation and cultural affairs for Gulf Shores, said the city, with help from the Gulf Shores and Orange Beach Sports Commission, is in the bidding to host the National Association of Intercollegiate Athletics (NAIA) National Championships in 2014 and 2015. The association has nearly 300 member schools with more than 60,000 student-athletes.

Brown said the city is able to host collegiate and AAU (Amateur Athletic Union) events after the extensive, city-funded track resurfacing project that included the addition of a steeplechase and other track-and-field event improvements.

“They are coming down to do a site inspection during our state track meet,” Brown said of a scheduled NAIA visit. “And they delayed the date that we’re allowed to submit (bids). It was due in December and we were able to wait till February to submit and now they’re sending people down in May to see it. I’ve got to believe they really want to come. We’ve already hosted NAIA softball and soccer successfully so the NAIA knows the quality of an event that we can put on.”

According to statistics from the sports commission, the beach cities with help from Foley hosted 88 events last year, generating 64,076 room rights and $22.4 million last year.

Brown said while the track is finished it will not be open to the public until Monday, April 8. It’s also the home track for Gulf Shores High School and other schools hold meets there.

“We’re going to keep it closed for a week so that we can get the infield redone and get the sod laid and all the cleanup stuff done,” Brown said. “Then we’ll open it up and people can go out there. Obviously we have to be very careful. No strollers, nothing with wheels on it, only athletic shoes. We’ll have some new rules and regulations posted.”

Precision Sports Surfaces Inc. was awarded the contract to improve the track at Mickey Miller Blackwell Stadium in the sportsplex. The old track was 15 years old and the city would have lost the state meet if upgrades were not made. The city has a contract to host the Alabama High School Athletic Association’s track championships for 4A, 5A and 6A schools through 2014, and the event draws more than 2,000 athletes and their families to the area. The next state meet is set for May 2-4. 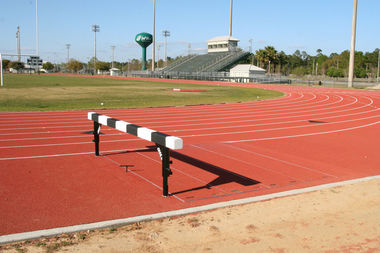 View full size A new steeplechase hurdle along with a removeable track cover, where water will added, is seen on Monday, April 1, 2013, in Gulf Shores, Ala. Steeplechase obstacles were a key addition in the $550,000 track project at the sportsplex that should help the city land a collegiate track-and-field competition. (Marc D. Anderson/manderson@al.com)

“We had 2 more years in the contract with the state, so we stepped back and said, ‘OK. Look, if we’re going to do this we need to do this right.’ So we completely resurfaced it with asphalt to get the tolerances, not just appropriate for high school but also appropriate for all NCAA collegiate events. We can go as high as we can, which is a .08 tolerance. The track has to be almost perfectly flat, within a .08 degree. We did that and then put this polyurethane on it — the state-of-the-art, best running surface that you can get.”

In addition to the new surface the city added the steeplechase obstacles, curbing around the track, expanded the pole vault runway area and purchased new pits, which are basically large landing pads, for the vault and high jump events.

“We also added power and Internet at the start and finish lines to be able to broadcast the results on the Internet through timing companies,” Brown said.

With the new pit areas for the pole vault and high jump area, Brown has asked the City Council to designate the old ones, which have little resale value, as surplus and donate them to schools that have shown interest in using them. 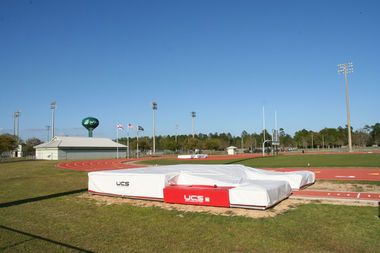 “We’ve had requests from Baldwin County schools — Robertsdale and Spanish Fort — for our old equipment,” Brown told the council during its work session Monday night.

After Mayor Robert Craft was assured by Brown that it wasn’t worth the city’s time to sell the old equipment or for Gulf Shores High to use it since it utilizes the sportsplex track, Councilman Jason Dyken had another idea.

“Even if Gulf Shores wouldn’t use our new equipment is there any thought or any utility in donating it to Gulf Shores (High) and letting Gulf Shores trade out maybe for other equipment they perhaps could use? Or could Spanish Fort give us a football victory next year?” Dyken quipped.

Grant replied, “Maybe that’s the better trade, but my hope is that we will just let it go.”

Brown said the equipment is in poor condition, it’s not something the city would want to hold onto and the school does not have the proper place to put them.

The council will vote on the issue at Monday’s meeting.